Today we reach the milestone of 3 months until Christmas Day.  The lead-up to the Christmas is critical to the success of most shops, with about 30% of their annual turnover typically being achieved during the Christmas and New Year season.

Although many of us think that Christmas starts far too early these days, this milestone will see retailers stepping up their preparations for Christmas to another level.

For example next week will see the publication of many of the books which are aimed at the Christmas shopper.  There’s little surprise that the book widely expected to be the best seller this Christmas is Jamie’s America which was released to tie in with the transmission Jamie Olivers highly successful Channel 4 series of the same name.

In Edinburgh Princes Street has been seriously disrupted all summer as the road is closed to all traffic, including buses and taxis while a new tram line is being built. It was reported today that retailers on Princes Street have persuaded the city council to reopen the road to buses on November 28th in time for the Christmas and New Year shopping season. 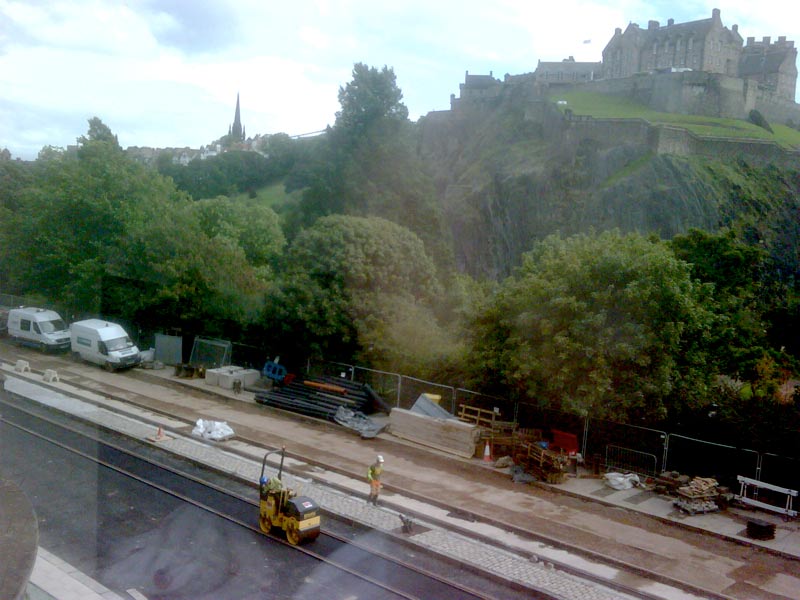 I took this picture of Princes Street with Edinburgh Castle in the background a couple of weeks ago from the top floor of Waterstones bookstore.  Hopefully the works will be completed on time and the road will be open to buses again on November 28th as planned.

Just in time for Christmas and a few days before the rumored launch of a new range of Mac hardware, Apple will tomorrow (Saturday Sept 26th 2009)  open their 270th retail store in Norwich (Norfolk England), which will be followed a few hours later by them opening their 271st in California in the USA.

Meanwhile Retail Week reported today that they had commisioned ICM to poll shoppers about their purchasing intentions this Christmas.  They claim that a third of the people polled plan to spend less this Christmas than they did last year and last Christmas was the worst on record for the retail sector. But this is going to be an unusual Christmas.  The threat of postal strikes here in the UK and the constant media reports of delayed post is beginning to shake peoples confidence in the ability of mail order and internet retails to deliver the goods.  If the threat of a postal strike doesn’t get sorted out soon this could be the first year that actually see’s spending online decline in favor of the high street.

So here we are, three months before Christmas and it’s really interesting to see how things are warming up.

← Prev: Christmas Gift Idea for Mothers Next: A Christmas Carol →